is this your lunch?

so i don't know if this is blog-worthy or not, but i'm still OMGing out loud, so I figure its important enough to post all over the internet.

about 30 minutes ago, i was driving down east washington from the east side towards the capitol. i think i was at a red light somewhere near highway 30 when i looked to my right and saw, inside a black pickup truck, an older gentleman with a white beard and dark sunglasses. in his hand was a bottle of that squeezy butter...the brand was parkay.

i did a double take and started to wonder...maybe he just went grocery shopping and it had fallen out of the bag. oh wait, no...he's opening the bottle! well, maybe (and this was actually my thought process) its some other substance inside this parkay bottle...like antifreeze. i don't know. that's just what my head thought. yeah! maybe it's antifreeze. oh WAIT, NO! he's putting it on something. oh jesus. he's eating it on something in the car. probably it's popcorn, right? i mean what else could it be? popcorn!

no. it's a saltine. he's putting squeezy parkay butter on a saltine cracker and holding it above his head and dropping it inside his mouth and eating it.

he did it 3 more times before the cars started moving again. i did my best to drive next to him for the rest of my drive, but once he saw me staring, he gunned his engine and cut me off, leaving me in the dust and the mystery of the parkay on the saltine.

so most members of my family attended my cousin dan's wedding in dc right before new years. i missed it because of snow. waa waa. anyhow, there was this professional photographer there who took a bunch of really beautiful pictures and then emailed the album out to all the guests. that's pretty great, right? well, here's the catch. across the bottom of each print, in big white letters, is the word "proof" so that you cannot just have the pictures. in order to get prints without the word "proof" on them, you have to purchase them. with money. that is the catch, my friends. what a genius.


so. my brother emil has one of these pictures up as his profile picture on facebook right now, and honestly, it is a beautiful, professional, wonderful picture of him and his girlfriend mladenka sipping wine and having a laugh. with the word "proof" emblazened across the bottom of the picture. emblazened? is that a real word? anyhow, here is the picture: 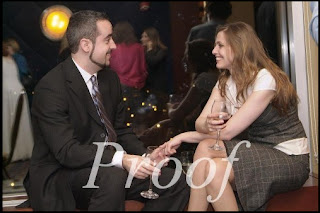 i can't stop looking at it...not because its such a great picture, but because i have suddenly turned into a crazy talented ad wizard, apparently. i mean, it looks like a wine ad, or some kind of magazine ad, right? so here are some of the captions i have come up with so far for this picture:

"Proof...that wine is the way to a woman's heart."

that's all i can think of for now. so anyhow, if i am unreachable for the next few days, it's probably because i'll be having so many meetings with people who want me to run their ad campaigns.

i mean, really. not just anybody can write this genius material. it takes a lot of talent, and a lot of class, and occasionally some liquor.
Posted by Reem Tara at 12:13 AM 1 comment:

madison people know and non-madison people surely heard about the snow from yesterday. i think there was about 14 inches. needless to say, we had a snow day, which i spent eating nachos and playing guitar hero with mercy. anyhow, because i didn't move my car right away, i got really plowed in near a bus stop. last night as i left to go to the high noon for a show, i saw my car covered with about a foot of snow and surrounded by probably another 3 feet, tightly pack in on all sides. on the window side, somebody had written in the snow "HELP!" oh madison. 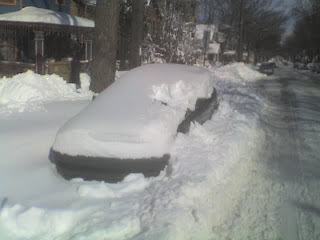 so all in all, i think i spent about an hour digging my car out. it wasn't really all that bad...after about 35 minutes i was able to open my drivers side door, so i put on the new m.i.a. album for all the neighborhood to hear. it was actually kind of weirdly fun. i didnt even mind when the old foreign man told me that i should have moved my car this morning. i didn't even think "duh, d-bag," as i might usually. 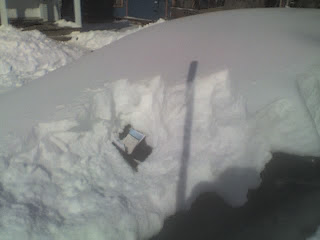 this is where the parking enforcer cleared the snow off my windshield...just enough to place a parking ticket under my windshield wiper.

i think what made the day really okay was that after having been so effing overwhelmed this winter, feeling so weighted down by all the snow, feeling really completely alone and stuck and fucking helpless and screwed over, was that the snow could be moved. that there was this tiny bit of control i had over, well, the things the weather and nature and everything had brought...that i could actually move the snow out of the way and take care of it and that being able to do that made everything okay.

oh and this is me leaving the snow in a cloud of...well...snow, i guess. 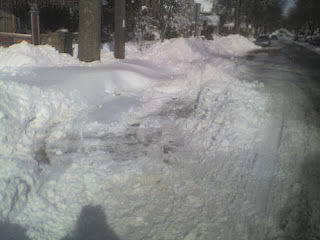 for real. i'm serious. way to go. way to go!!! everybody is a hilarious genius, i.e. a brainiac. The main reason comes from one daniella maria who, as of 7 minutes ago, entered herself into the Best Quotes of 2008 contest. With weid and dawn marie already in the running, daniella knew she had a lot to live up to, but she came through with flying colors. you can tell that she really has her head in the game

and here you go:

oh god i just laughed so hard that people were jealous. jealous of me and my hilarious friends. damn damn damn.

in other news, here are some things i'm doing right now to save money:

*i only charge things outside of my house. for example, i only charge my phone in my car, and i'm trying to only charge my computer at work.
*i'm drinking the free coffee at work. this is really great, since they're treating us with the Coffeemate brand French Vanilla Creamer. can you say DELICIOUS???
*sometimes i eat taco bell. for like, days straight. i'm serious, check my car and the trash.
*instead of seeing real bands play, i'll play guitar hero for free.
*instead of fighting bad guys and doing flat track racing, i'll play mariokart and sonic the hedgehog for free
*i'm stealing. a lot.
*i'm renting out my linai (thats the back deck, fools) to a hobo
*i also eat a lot of grilled cheese. i make 'em with two types of cheese!
*friday nights instead of my usual high class night of dinner at l'étoile and drinks at the opus, i'm just staying home to watch friday night smackdown.

i think its going pretty well so far. oh, and i am made out of snow. because that's how much it has snowed this winter. so much that my body is now comprised entirely of snow. that's why i'm such a cold bitch.
Posted by Reem Tara at 12:08 AM No comments: