this is what happens when your father is a urologist

When you are a teenager, you are required to work one summer in his office downtown. You have to take the L and figure out your way there and back, and then learn to answer phones and file things and write letters he dictates. You memorize phrases such as "the abdomen is soft with no masses or organomegaly" and can correctly spell at least 50 different medications, many of which are for ED (erectile dysfuntion) or BPH (benign prostatic hyperplasia), or help to treat LUTS (lower urinary tract symptoms), which can include a weak stream, dysuria, urge incontinence, frequency, and nocturia, among other symptoms.

And finally. Finally. It clicks. You recognize the word, and you throw your arms up in the air and yell "SCROTUM!"

It was scrotum all along.
Posted by Reem Tara at 1:52 AM 8 comments:

what it do? (a strawberry margarita)

The answer is: makes things awesome.

Some may believe that capping off a somewhat depressing week with half a pitcher of strawberry margaritas at 2:00 in the afternoon could be considered alcoholism. Or at least, it could be leaning towards alcoholism. On the path to. Something... 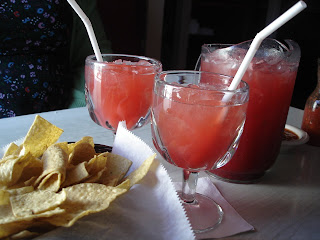 I can see the lanai

I really can. Almost all of the snow is gone and I can see the majority of the wood, and the table and chairs are uncovered. How romantic! Come over, and we’ll have a totals sexy night. We’ll sit together at the table and drink glasses of wine and watch the moon and stars, and listen to the crickets chirping in the night. The colored christmas lights will twinkle against the darkness, and we’ll look into each others eyes and we’ll know that this is all we need.

Well, except, the seats are all wet. with more than water...dirty water. They’re, like, soaking wet. It will make your pants wet, and you’ll look like you peed. And remember that time I put the garbage out there because I couldn’t get to the trash cans because of all the snow? Well, there are remnants of that garbage, chewed up and discarded by squirrels. It looks like pieces of fruit and soggy papers...maybe the Shopper Stopper. Maybe 8 different Shopper Stoppers. And actually, the wet wood kind of smells like it’s rotting. Ooh, that can’t be good.

Whoops a daisy. I don’t have any wine. I only have what’s left in a handle of Fleischmann’s vodka...probably about a cup and a half, which has been in my freezer for about a month, next to some old waffles. And not a mixer in sight. Will this do?

Is it a total buzzkill that about half of those lights won’t turn on? Yikes...sorry, dudes. Sorry about that. I’ll try to help you not bump into anything or trip as you walk through that garbage.

Well, I guess it’s more about the company, right? The sexy company with sexy results. Is it still sexy when you make me laugh and i cough violently and uncontrollably, right in your face? Is it still sexy when I ask if we can cut the bullshit, go inside, and watch Friday Night Smackdown? Do you mind that I find it almost impossible to wear pants anymore? What about the fact that my already short attention span has lessened to about a 20 - 35 minute time span? Is it offensive or hurtful when you’re whispering beautiful and flowery words to me, and all I can think about is recipes for non-dairy macaroni and cheese, or what order I’ll put the songs on my next mix cd? Is it?

Well, I’m sorry about that. That’s what the winter has done to me, my friends. It has turned my formerly Sexy Results into Somewhat Sexy Results with a Few Exceptions and Probably a Lot of Buzzkills. With the promise of laziness and delusion. And the inability to concentrate on what you’re saying.

Still, I can see the linai. That’s something, right?

And by the way, it’s not self-deprecating. I still find myself charming as hell. I hope you will too. And maybe I’ll just put this blog up on a personals dating site.

Omg. I’m kidding. I’m awesome. Who doesn’t want to get with this??

Holy shit dudes. Did you know that on the (unedited) actual dvds of sex and the city, you see penis? Actual penis. For serious. Sorry, but gross, dudes. Gross. I'm watching an episode because alls thats on tv is the WIAA boys basketball games. Look, it is what it is. omg. And Miranda just said "fuck me like there's no tomorrow." Yes she did. This show is ridiculous. And yet i continue to watch it twice a day some days.

I was killing time at walgreens the other day, waiting for a prescription to be filled. I find it really easy to waste time there. There's always some kind of surprise around the bend at walgreens. For example, Mercy and I once saw some kind of chicken fries in a box that were made by some country singer...who was it? Vince Gill? Anyhow, they were only a dollar. I believe Shawn bought some, which is pretty awesome. But yes, it's like a fucking fun house up in there. Anyhow, I was walking around and found myself in that "personal" aisle. You know the one. Have you noticed how expensive condoms are? Seriously. They're really expensive! I guess you have to be rich to afford safe sex. Jesus...

Today is one of the days that I have to drive to all corners of the earth to go to lessons. I found myself thinking about how everybody was driving twenty times slower than they needed to, which is usually a sign of either me speeding, or impending road rage, or general frustration with everything. So goes this winter. Even my blogs suffer with the snow. Bored.

This feels like a seinfeld blog. "What's the deal with everything in life?" "Mediocre plots!" "Made up words!" My dad hates all the characters on Seinfeld, especially George. He hates how lazy he is, and how he never does anything good for others. When my siblings and I were younger, my parents didn't regulate television too much, but the one show they wouldn't let us watch was Married with Children. In my opinion, it wasn't the sex or the language or anything. It was that the family was mean to each other. And my parents wouldn't stand for that. Anyhow, back to the George thing. Although my dad hates him and thinks "this is the stupidest show," he still totals watches it. Kind of like Dumb and Dumber. He *hates* that movie, but he'll watch it in its entirety. Because it's funny. Stupid, yes, but damn funny. He hates it that he wastes all that time watching it, but deep down, I don't think he really has a choice...
Posted by Reem Tara at 2:50 PM 3 comments:

okay. so I need to tell you all about several unbelievable things that have happened since I've been in chicago. some are amazing, some are insanely disappointing, some are hilarious...and the only word I can think of to describe them all is "unbelievable." but believe it dudes. believe it.

1. i saw this band Bang Camaro at the Annex on Thursday night (read my dane101 review of it here. It's not too shabby). As it turned out, they were going to be playing at the double door friday night, so emil and i decided we'd go check them out. because they were one of the greatest bands I've ever seen in my life. Anyhow, they're the last band out of three to play, so we show up at about 11:45. and they were effing finished already! are you kidding me? does anybody even know how to party anymore? Finished before midnight...that is like the least rocking thing you can do. I was unbelievably disappointed. See? Unbelievable.

2. My mother wakes me up at 9 am on Saturday and tells me to go look out the window. There, in the backyard, are four full grown deer. They're eating out of the bird feeder, chasing each other around in the snow, and one is every laying down under a tree. Like it's in its own living room or something. Just hanging out, in the snow, in my parents backyard. Finally, I get to describe animals as "so peaceful...so majestic...so beautiful." Because they really were.

3. Emil and I go to visit Jiddu, our grandfather, who unfortunately, has been a little out of it lately. He doesn't speak or understand too much English, so Emil is translating incredibly well between the two of us. He really was amazing. Anyhow, the best part was when Emil told Jiddu that he was going on vacation to Mexico later that day. Jiddu looked at him kind of blankly for a minute, then responded with "faruja?" Basically, he was asking if Emil was taking his "Faruja" with him to Mexico. Faruja translates literally into "small baby chicken, 8, maybe 9 weeks old." Jiddu was referring to Emil's girlfriend, Mladenka, because she looks like faruja. Come on now...hilarious.

4. I drank a martini whilst showering. Not whilst in the bath, mind you. I'm not a character on Sex and the City, thanks very much. In the shower. My dad made Cosmopolitans to calm everybody down at some point, and I took mine to the shower. I am awesome.

5. I hung out with a friend from high school who I barely knew, except we'd had one class together over ten years ago, but haven't talked since then, and we got along more famously than almost anybody ever. Seriously.

I think that's it. Goddamn, Chicago. You really did one over on me this time.
Posted by Reem Tara at 2:02 AM No comments: