I'm a big fan of gift cards and gift certificates. Around the holidays, I receive a lot of them from my students and their families. They've caught on over the years; I've gone from receiving Starbucks gift cards (that I sold to a friend, by the by) to ones for Victor Allen's, a local coffee chain. This year I got three from Subway (because the kids listen when I talk about how much I love sandwiches, see?), one or two for different bars, and two gas cards. Yep, they've got me figured out.

I keep all the gift cards in a little glittery green wallet my friend Tara gave me a few years ago. There are cards in there that are at least five years old. One of them, in particular, always caught my attention because of its obscurity and randomness. It was a card for Jamba Juice.

JAMBA JUICE. What the hell?

My mother handed me this Jamba Juice gift card once, years ago, saying that a patient at work had given it to her and she'd never use it. I shrugged and accepted it, figuring I could, one day, probably stomach a frozen juice or smoothie or whatever they serve there. I kept it in my green wallet and thought nothing of it until, one day, I decided to check the balances of each of the cards. Seven bucks and some change on the Subway card, twenty dollars even to Panera, and a whopping $30 to Victor Allen's (a gift from some siblings - I totally scored on that one). When I came to the Jamba Juice card, I almost ignored it, figuring I'd probably never get to Jamba Juice anyhow. But, just for fun, I decided to check the balance. Guess how much was on there...

$50. That's five-zero. FIFTY DOLLARS. To Jamba Juice. Again, I ask you: What. The. Hell?! Who even buys a Jamba Juice gift card for fifty dollars?!

After enjoying the initial shock and hilarity, I sort of ignored the card for awhile. I always knew I was sitting on a goldmine of blended fruit, ice, and "boosts" (more on that later), but never had the interest or motivation to actually act upon it. UNTIL NOW. Whoops, caps lock. Until now...

A few weeks ago, Andy and I went and saw a play at the Overture Center. We don't often find ourselves on State St., so we decided to take a little walk. As we strolled down the street, a bright yellow vision appeared before us...Jamba Juice. The one and only. We looked at each other. "Should we do it?" I asked urgently. "I mean, fifty dollars." We were both intimidated, and decided to walk past and try again on our walk back up State St. When we arrived back, however, we were both too freaked out/nervous/scared to go in. Yes, seriously. Jamba Juice is intimidating.

But finally, the actual, real time came this past Sunday. The time to nip it in the bud, get on with it, just do it, and other such slogans. We found ourselves on State St. again after a lovely breakfast with my parents and a long walk, and so, as the bright yellow sign once again appeared in the distance, we squared our shoulders, narrowed our eyes, and determinedly headed inside.

The air inside a Jamba Juice is different. It feels recycled and recirculated, sort of like in a mall, but with the addition of a heavy citrus scent, which made my eyes water. The long line of people waiting for frozen juice wore colorful clothing and bored, indifferent faces. These colors and faces reminded me of the air: sort of false and sour. Many of the people there had fake-tanned legs. The clothes they wore were all different, yet seemed chillingly similar. I couldn't put my finger on what it was, but it seemed almost like some sort of unofficial uniform. One that nobody had told Andy and I about.

We read the menu sort of desperately and hysterically, feeling very much under pressure. "I'm deciding between the...uh...Mango-a-go-go and the...Orange-A-Peel," Andy said, looking intently at the list of confusing and stupidly-named beverages. I started to laugh and took a breath, ready to totally make fun of him, when I realized that I was probably going to order the Orange-A-Peel myself. Dammit. Lesson #1: If you're at a Jamba Juice, you're going to sound like a damn fool no matter what you order.

Once we'd decided on our orders (the two listed above - please don't make me write them out again), we then had to decide on what "boosts" to add. Yes, boosts (read about them here). We'd joked earlier about trying to create a drink with one of every boost in order to try and spend the $50, or at least a good chunk of it, but once we were inside the actual Jamba Juice, we knew it would be an impossibility. Or cause major loose stools, know what I mean? Those boosts are just too intense. Anyhow, I went with a 3G Charger Boost and Andy picked the Flax and Fiber Boost, though I was tempted by the Weight Burner Boost so then I could lose weight WHILST drinking Jamba Juice. Effective diets, amiright gals?

We both ordered the medium size, which, incidentally, was called "Original." The smallest size is called "Sixteen" and the largest is called "Power." Yep, Sixteen, Original, and Power. Whaa? We both got a boost, and a somewhat pricey drink. And our total was only $11.39. We did our best, and that's all we could spend. My damn Jamba Juice card still has $38.61 on it. Ugh. 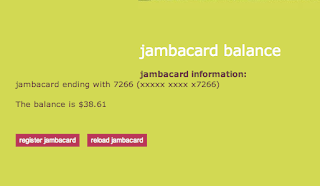 They do have some products for sale there, like water bottles and t-shirts, and even this pretty nice citrus juicer that my dad might like. Maybe I'll go back and get that. I don't think I can take another Jamba Juice experience, even if I just order the Sixteen.

So, what have I learned from all of this? Well, I guess Jamba Juice sells smoothies. That's basically what they are. Really mediocre smoothies. The taste was...fine. The consistency...alright. It was all really unremarkable. What a let down, right? Andy and I did our best to match the mediocrity of the smoothies in the pictures we took of each other: 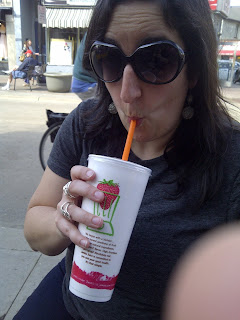 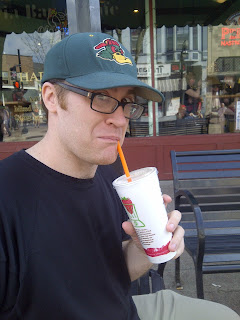 Other things I got out of this: Well, I finally spent some of the gift card and worked up the nerve to go inside a Jamba Juice. Sure, let's count that as something. What else...? Oh, Andy and I made up a whole new way of speaking to each other. We are now only talking in Addicted Boost Talk. For example:

Andy: Hey, I could really use a Boost right about now. Wanna hit up the Double J, brah?
Me: Awww, duuuuude, TOTALLY. I've been hardcore jonesin' for a boost.

Or, the sexy date version:

Me: Oh maaaaaaan, I had a hard day at work. I could really use a Boost right about now, you know, man?
Andy: Fer sure, yo. Let's shoot over to the Jambs and grab a coupla Boosts, have a nice romantic night, ya know girl?

Andy (arriving after the long drive up to Madison): Babe, I GOTTA get me a Boost. It's been a week - there are no JJs in Monroe. We gotta get to State St., like NOW!
Me: Oh...yeah, sure...let's...um...go in a little while.
Andy (long silence, followed by a hysterical): DID YOU BOOST WITHOUT ME?! DID YOU BOOST WITH SOMEBODY ELSE?????
Me: No! It's not like that! I just...I just really needed a Boost and I was just passing by...
Andy: I can smell it on you. You reek of citrus. And your hair is so lush and shiny...YOU DID THE ANTIOXIDANT POWER BOOST! We were going to try that one together. TOGETHER!!!
Me: Babe, I swear, I only had one. I needed it. I DIDN'T THINK I WAS GOING TO MAKE IT!!!
Andy: It's like I don't even know you anymore.

Yep. That's what I got out of my trip to Jamba Juice. Hilarious, make-believe conversations.

Well, that and a blog entry, finally. I'll take it.

UPDATE: How could I forget to check on my favorite local restaurant review website, Eating in Madison A to Z, who just finished an EIGHT YEAR PROJECT to try every restaurant in Madison. Wow, that's akin to eating, like $250 worth of Jamba Juice, dudes! Check their much more respectful and mature review here. Baby aspirin. You are spot on, Nichole.
Posted by Reem Tara at 12:03 AM 15 comments: