How To Make Your Own Spring Break! Part Two: The Delicious Food

Hey everybody! Remember when I made my own Spring Break?? Well, as I promised, there was more to it than just driving and eating cheese fries. I mean, yes, those are obviously the most important things, but there were other things too! For one, there was all the local Delicious Food. I've always been a fan of Delicious Food, and I definitely see it as an adventure to try new and exotic cuisine in each place I travel to. I've eaten edamame in Atlanta, sampled sandwiches in South Dakota, and...um...jammed on jam in Jamaica! Whoa! But even with my vast travels and exploration with these delicacies, there were none as unique and tasty as what I experienced on my vacation in Glenview. You wouldn't even believe it. So here are some pictures:

You probably haven't heard of this before, but there's this thing called sushi. It's rice and seaweed (I know, CRAZY!) wrapped up with various filling. Totally weird, right? I stuck to the non-fish varieties. Great, authentic, real American food right here. 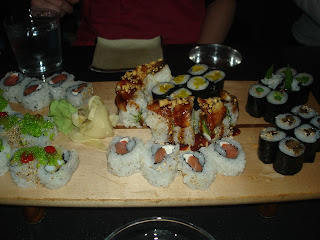 Served with a pineapple mojito. Booze is pretty delicious too! 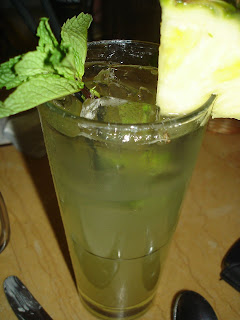 Although I stayed away from fish with the all-American sushi, I did sample some at Grandpa's Place at a Friday night fish fry. 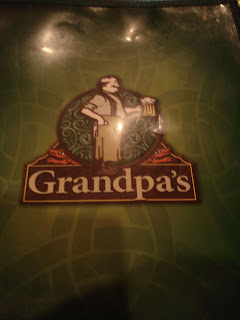 I've got to say, you can fry almost anything and put a little lemon and malt vinegar on it, and it will basically be awesome. Even fish! Oh, and dip it in a creamy sauce (in this case, tartar). 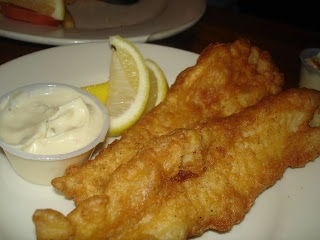 This is what we in Glenview call "beer."  Not too many people in America have tried this drink, but I personally think it's worth it. This is a Blue Moon. Read more about beer here. 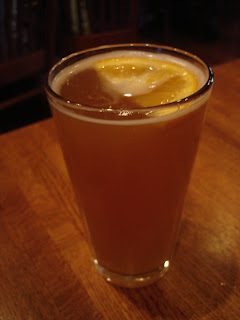 So there are a few culinary specialties in the city of Chicago (a small city located just fifteen or so miles southeast of Glenview). I mean, it's not like the city is known for it's food or anything, but it does okay. Emil, Mladenka, and I planned on going to Hot Doug's to sample one of these Chicago delicacies: the hot dog. But, unfortunately, the hour-long line was too long for those of us who hadn't eaten yet that day and were feeling crabby. Not to worry though! Rumor has it there will be a Hot Doug's review up on another website soon!

So instead, we went and got SANDWICHES at a lovely little place called Capt'n Nemo's. I'll be honest, this is an old favorite, and although missing out on Hot Doug's was disappointing, this was totally worth it. 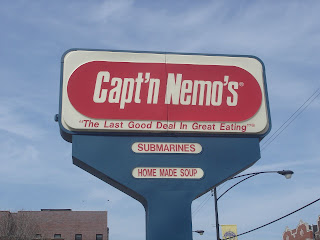 This is Emil's turkey club. Notice how they somehow magically fit an additional layer of bread between the two layers of filling?? NOTICE?? 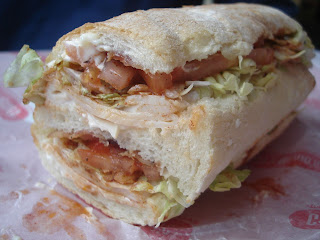 This is their very popular ham reuben with light sauerkraut, which was pronounced hilariously. Look at that bread! 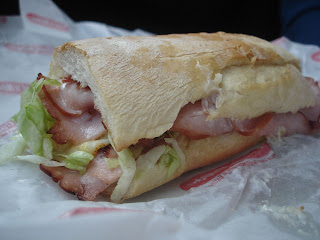 This is the Americanne. It contains ham, bologna, and turkey, along with american cheese, tomato, lettuce, mayo, and the Captain's Secret Sauce, which, incidentally, you can buy by the bottle! Yeah America!!! (As an aside, I ordered this, and as I do every time, I took one bite and then had to take out all the ham. I always think I'm going to like ham, then I try it, and I don't like it. The same thing used to happen when I'd go to Denny's and order the Moons Over My Hammy. It always looks and sounds so good on the menu! But then I'd get it and take a bite and decide the ham tasted bad and pick it out. Sorry, ham.) 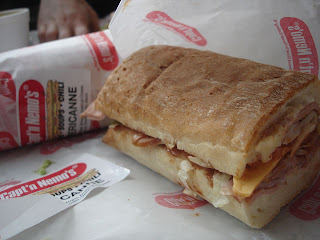 Split pea soup. As you walk in the door, you are greeted by a guy behind the counter handing you a small but satisfying sample of this soup. It is delicious. And so shiny! 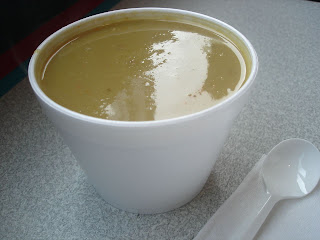 I think maybe this is another view of the Americanne. 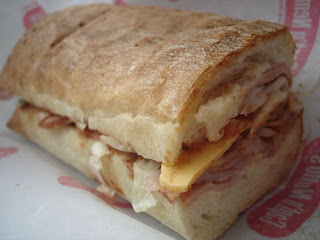 Probably the best night of the week was spent in my parents' house eating one of my mother's amazing, impressive, delicious dinners. My sister once mentioned in her blog how my mother makes the most wonderful dinners. This one was no different. And here is where we have the aforementioned "chicken" that I'd heard so much about. It was cooked in a bag! Here's the entire spread: 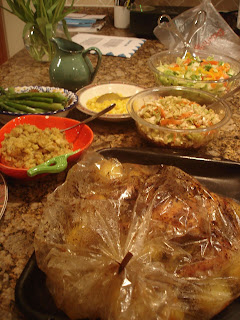 With all the fixings; roasted potatoes and gravy, stuffing, asparagus. The salad was in a separate bowl on the side because, duh, I don't want the salad dressing to get all mixed up in the rest. 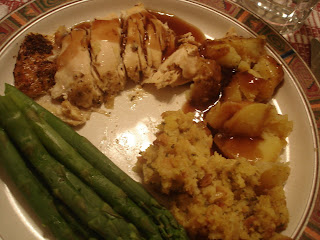 And for dessert, some incredibly rare finds: Cookies and ice cream. You all should try them! I know, it's hard to try new things, but these were great! 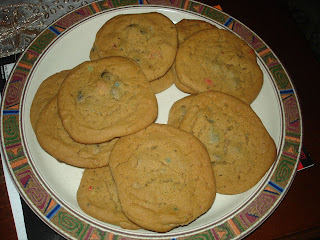 This is the Cinnamon Bun ice cream that Laith and Josh were raving about on my birthday. Laith kept telling me I had to eat more because I hadn't reached the "vein of cinnamon" yet. I think he also mentioned "the nerve center" of the ice cream at some point. Dudes. There were actual pieces of cinnamon buns in here. No wonder there were two pints in Laith and Josh's fridge - one for each of them! You should definitely try this. 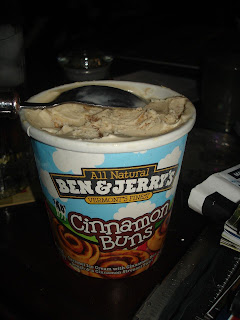 So there you have it! The delicious food of Glenview, IL. I know some of it seems real "out there," if you will, but I really encourage you to try new things. Look, you can't sit around eating nachos for the rest of your life. You have to live, man! On the edge! Be adventurous and try some chicken for once, okay?

when i finish this paper, i am rewarding myself with a pint of cinnamon buns ice cream, which i will finish before jp gets home on sunday. thank you for introducing me to this fantastic new food idea. i will now remove the saliva from my keyboard.

What a delicious Spring break! And thanks for all the blog promotion you got going on. I can't believe you ate fish. And yes, Cinnamon bun ice cream is AMAZING. I love the "vein of cinnamon" that's a great description.

Sherin, DO IT! You won't regret it. And make sure you hit the "nerve center."

Sarah, who knows more about beer than you? I mean, you have a blog and everything! Also, remember how I ate a fish sandwich with you and Danielle in Plymouth? Fried fish is great.