So I've Been Baking. And Learning!

So...I've been baking. Isn't there a line in My So-Called Life that sounds like that? Something like "So...I've been hanging out with Rayanne Graff." I dunno, I'll let you know when I figure it out. I know, it's important to me too.

Anyhow, I've been baking. I feel like, even though I'm sort of a half-assed cook, I can bake really well. Plus, it's winter and it's cold out, and this'll warm you right up. And baking makes me so, so happy! I like to wear this one apron my mother brought me from Herrods and put my hair up and listen to Pandora. Today it was a Sleigh Bells station, but most often it's a station based off of Regulate by Warren G. It really sets the mood, you know? Plus, baking is educational. You get to learn how ingredients react with one another, and sometimes you have to do math if you change the recipe - so much learning! Anyhow, here's what I've been making!

These are white chocolate-blackberry-almond bars. I definitely got the recipe from the back of a white chocolate chips package, thanks for asking. It was one of those days where I wanted to use up some ingredients I'd had around for awhile; white chocolate chips (which, by the way, are amazing), sliced almonds which I toasted in the toaster oven, and an old jar of blackberry jam. The recipe called for raspberry, but blackberry worked really well.

It's a simple crust with a layer of jam. I know, I know, only one layer of jam?! But that's what the recipe said. Sorry, dudes. This was delicious. 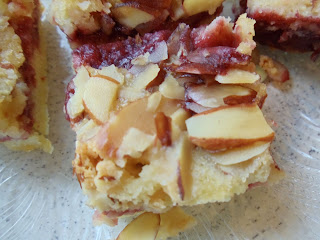 What I learned: Keep track of how long you toast the almonds in the toaster oven because it goes fast and you'll probably burn the entire first batch and your kitchen will smell funny.

These are pumpkin muffins with a streusel topping. Making the streusel was fun and reminded me of making blueberry muffins with my mother when I was younger. But to be honest, I overcooked the muffins and they were sort of dry. Not my best work. 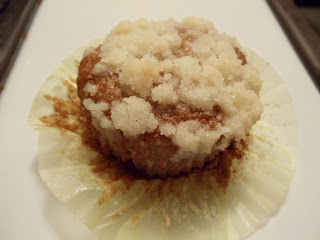 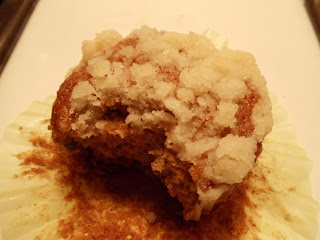 What I learned: Do not overbake. It's gross. And especially because this cute and charming young man tried one of these, and although he was kind and said they were good, I felt he didn't get to experience my finest work. So much pressure when people are so handsome!

On the big snow day last week, I made another kind of muffin: zucchini-bran-chocolate. I watched the baking time carefully on this one and they turned out so much better! Want to know a secret about these? They make you poop. I gave everybody at work fair warning. Yeah, that was fun to say to my boss. Whoops a daisy! 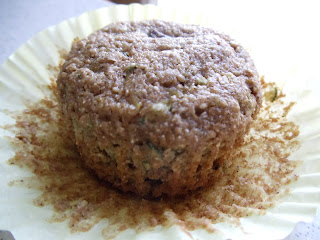 I use chocolate chunks because they don't get ridiculously melty, but they melt just enough. These are delicious, and I like the way the green looks. 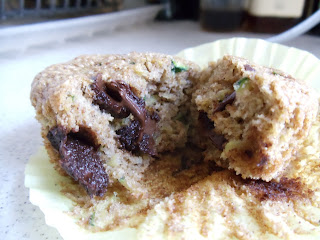 Second whoops a daisy: I was really spacey that day and forgot to cut the recipe in half. I gave away a billion of them and ate some and took many to work, and I still had to freeze some. 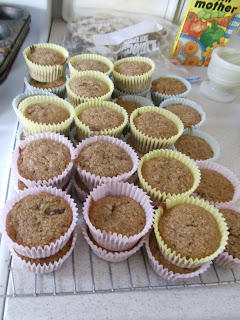 What I learned: It's funny to talk about poop at work, but mostly people act like adults about it. Except for me. I giggle a lot.

Today I decided to try a recipe I got from the mom of some of my students. She'd given me this frosted banana cookie the last time I was at her house, so I asked her for the recipe. I'd never made frosting before, so that was cool. Well, I guess I should say "frosting" because I think it's a little busted up. 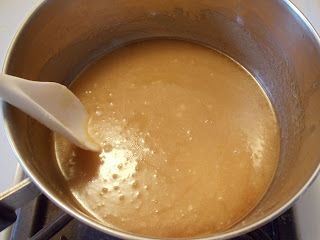 Here's the banana cookie. Tons of banana flavor. The flavor comes from the bananas I added. How bout that! 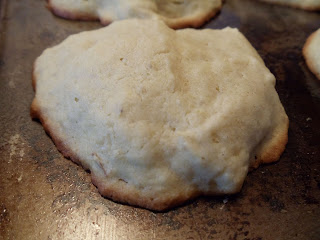 This time I actually cut down the recipe by a third, so I don't have a zillion cookies. It's still probably too many, though, seeing as I like the baking process more than I like the eating sweet things process. So, come over if you want. I have cookies. 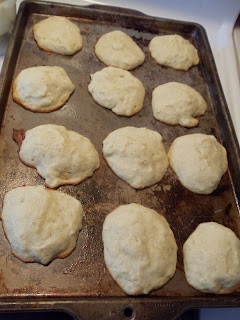 The recipe said to frost the cookies while they were still warm, but I think I was supposed to make the frosting way in advance and let that set for awhile. Well, I didn't. So the frosting got all melty and poured all over everything. See? Busted up.

Oh, and the other busted up part was that I didn't have any heavy cream, which was one of the frosting ingredients, but on the "internet" it said you could mix together butter and milk as a substitute. Here's how that looked - lovely, I know: 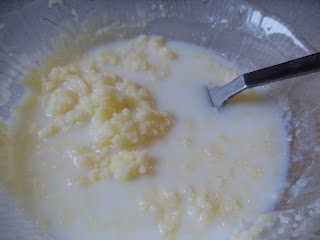 Whoops, back to the delicious, frosted cookie! On a cute plate. To get that milk-butter image out of your head. Sorry about that. 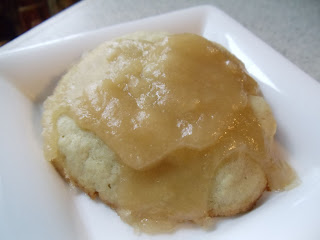 What I learned: Don't do all that busted up stuff. Or do it. Whatever. It all tastes fine in the end.

Wooo, baking! If you ever want some, come on over! I'm good at sharing baked goods. Just not sandwiches. Don't ask me to share my sandwich, okay?

Last thing! I'm trying to memorize all the countries of the world right now. I think I have at least 180 out of 195. So, there you go, more learning!
Posted by Reem Tara at 3:53 PM

Hooray for cookies! Also geography. Have you seen the "countries of the world" Sporcle quiz? http://www.sporcle.com/games/world.php

All of these look delicious. Even the butter-milk. Well done. Way to learn new skills! Now tell me about the cute and charming boy who liked your dry muffin. That's what she said.

@Nichole - YES! That's the site I've been playing on! I love it.

I've eaten some of this banana cookies before, they are really good! Also your "use" of quotes is either magnificent or deeply troubling.

well magnificent it is, then!

Nice job! I LOVE zucchini in baked goods, so delicious!