Bando Is At It Again: The Faces

So, I'm not trying to be creepy or anything. Please bear with me...I'd like to talk about the faces...

I have a fuzzy memory of watching Yo-Yo Ma play live with the Chicago Symphony. I think it was in Chicago...I'm not really sure. But I remember seeing him play and being so emotionally blown away. His face - it's like he's agonized and ecstatic all at once. He's proud and in pain, and straining and hopeful and at peace and barely breathing, all because of the music he's making. I remember him playing one particularly long, drawn out note, his body tilting to the right and one of his feet lifting about 6 inches off the ground. As he gently completed the note, his foot floated back down and rested at the same time he did. As the last note of the composition faded out, he held the silence of the cello and the crowd as if it was an additional note, keeping his bow in perfect position over the string, for about 8 unmoving seconds, and finally relaxed and looked up at the audience. It was only then that the audience could breathe again, and they erupted into applause. 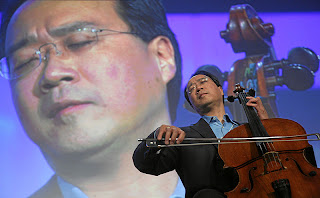 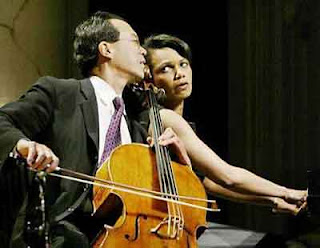 About six or seven years ago, I watched my favorite pianist, Emanuel Ax, play my favorite piece of music in the entire world, Beethoven's Piano Concerto No. 5 in Eb Major, at a lovely outdoor theater with my father. The music starts with a short piano solo, followed by the orchestra playing without the piano. I watched this short, fat man with a curly gray afro as he finished his solo. He put his hands in his lap, turning his head to the left to watch the orchestra, and I swear, I saw him shake his head back and forth, as if in disbelief. His grin was a mile wide and he switched back and forth from watching the musicians to watching the conductor. I think he almost forgot to start playing. All of a sudden, his hands flew to the piano, and without missing a beat, he began playing. I remember my eyes welling up with tears as the second movement began (my absolute favorite!) and my father waited until the end of the piece to ask me why I was crying. "Is it because you love the music so much?" he asked, smiling gently and kindly and kind of amusedly. I nodded my head and linked my arm in his and we listened to the rest of the music just like that. 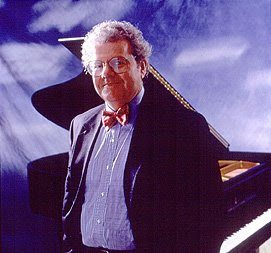 This past May, I saw my favorite band, Devotchka, two nights in a row; the first night in Milwaukee with Jacob, Sarah, and Wendy, and the second night with Emil and all four Hodi cousins. I was so glad I went both nights because the first night, I could barely take it all in. I stood near the center of the crowd, about eight feet back from the low-to-the-ground stage. I'd seen the band once before, a year and a half earlier, but didn't know their music as well at the time and had been at the drink way more that night. I was thankful for my sobriety on this particular night; it aided in me obsessively watching Nick Urata's face for the entire performance. I don't think I blinked much... 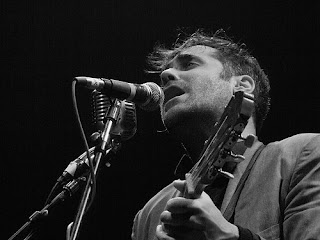 I definitely feel that Nick Urata's voice is one of the most expressive I've ever heard. Of course, he reminds me so much of one of my longtime favorites Roy Orbison, who has this perpetual sob in his voice, even when singing about the kind of love that actually works in the end. So maybe I'm biased. But really, I'm pretty convinced that during the recording of the song "Undone" from A Mad and Faithful Telling, he had a slight beard going. His voice is so tired and almost hoarse...I imagine him with a three day beard, having not slept in that time, just trying to sing this beautiful song with his beautiful voice. But that's just his voice. Then of course, there's also his face. Oh my god, his face. He's positively anguished at most times, in addition to looking exhausted, bored, amused, and almost peaceful at other times. I knew I fell in love a little bit when I saw him raise his eyebrows to hit the high notes while his eyes were still closed. I know, I've said it before, but I'm saying it again. My heart is all a flutter just thinking about it... 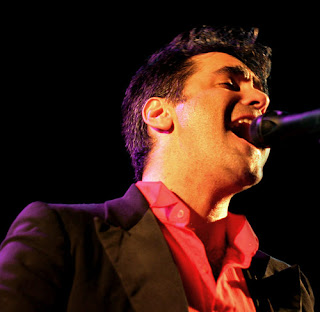 I do start to get self-conscious and begin to wonder if I do anything funny when I play piano in front of people. While it's pretty rare that that even happens, I'm still curious. I know there's something funny going on with my left leg and foot sometimes, and I often find myself biting on my lips. But I wonder what else might be happening...

One last thing: I have to share this video of Van Cliburn, another of my favorite pianists, playing the Second Movement from the Beethoven Concerto I was talking about earlier. The video was made in Moscow in 1962. One of the main reasons I love it is because they really focus on his face; they don't even show his hands playing for most of it. He keeps his eyes closed for much of the performance, playing so gently and delicately. It blows my mind that he was younger than I am now when he performed this. I honestly believe this is the most beautiful piece of music ever to exist. Just my opinion. But a good one, I think. Watch the video, listen to the music, watch the face. It's like it was almost too painful, too difficult for him to play something this beautiful. Seriously, take a break from making fun of my nerdiness and please please watch this.

When I was 10 I went to a Yo-Yo Ma/Emanuel Ax dress rehearsal here in town. It was really interesting to watch Ma go through the same passage and see his body language repeat itself... lean back slowly, stare at the ceiling a little, and come back to the front. Not disconcerting at all, just very mellow.

Nadja Salerno-Sonnenberg (violinist) is kind of the opposite. She practically talks to herself.

Suz, you saw both of them? I can't even believe it. This is pretty much my dream come true. You describe is perfectly - that's totally how he was!

The talking to oneself thing is interesting too - I saw David Helfgott perform and all he did was talk to himself and play everything 75 times faster than humanly possible. Maybe because of the shock treatment he received in attempts to cure his schizophrenia...

you're adorably geeky! also, is that Michelle Obama playing with Yo-Yo Ma?

Sara, that's hilarious, because Genia just sent me a message being like "Who is that Condoleeza Rice?!" You all are brilliant.

okay, van cliburn is exempt from my upcoming criticisms, because he's amazing. but i'd like to take a moment to criticize all my fellow high school orchestra dorkmates who flamboyantly professed their superiority by faking this sort of facial and body movement. remember those kids?? love it. okay maybe i'm being a hater. love you fellow north-high-orchestra-dorks! one love!

i really like your dad. "Is it because you love the music so much?" and the fruit and everything you say about him. he sounds like such a sweet and lovely and great guy.