You've Got to Know Your Chicken

I think I might barf before I even begin this one. Sigh...the lengths we go to for our art. Or our blogs. Whatever. So, you may have heard that I'm a picky eater. It's funny, because in my immediate, surface thoughts, I really don't think I am! To test myself, I start making a list of foods I don't like: seafood, most fish, peppers...that's it, right? Then I remember where the pickiness comes in: I don't like mixing certain vegetables or meats with eggs. I don't like to mix meats with each other, unless it's bacon on a sandwich that already has another type of meat. I pick out green parts of things sometimes when I don't know what they are. I believe that on certain nights, things taste way better eaten out of bowls. Milk has to be ice cold. If chicken has a funny texture at all, like even a 0.5% funny bite, I'm done with it.

But these things all seem very reasonable to me! I mean, look. Lukewarm milk can be really, really gross, dudes. Maybe it's just that I'm a particular eater, not picky. Regardless of what I am, I'll tell you this: I am not able to cook meat. Don't get me wrong; I'll eat the crap outta some meat if somebody else prepares it for me. But making it myself? Barf. That means I'd have to look at and handle raw meat! Sickening. Especially chicken. To be fair, I have dealt with raw fish and beef before. I don't like it, but I've done it. I once dated a guy who bought us meat to make burgers for dinner and made me make my own burger. What an ass! But I did it, and it was fine, and no, I didn't learn anything from it or feel any better about raw meat, so maybe he should have been a gentleman and just made me the effing burger himself. Damn. Tis the season to handle the raw meat for me and let me lay around with a glass of wine making hilarious and witty comments, "gentlemen." Jeez.

My mother tells a story of coming home from work one night while I was in high school, expecting me to have started preparing dinner. She had called and asked me to trim some of the skin off the boneless chicken breasts she had defrosting. Man, I remember starting that chore soon after she called, and her drive home from work had to be a half hour at the very least, maybe 40 minutes...yet, as she walked in the door, I was standing there at the counter, facing away from the chicken on the counter, trying to cut tiny pieces off the chicken whilst simultaneously not barfing. I gagged a lot. My mom laughed a lot and finished making dinner. 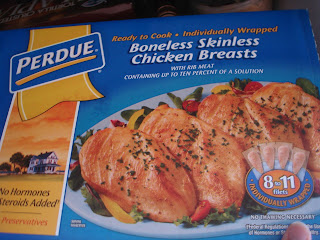 Ew. Even looking at that box grosses me out right now. Oh lord, I hope it's not still in the freezer. I'll check later. Anyhow, they're packaged individually so they come out looking like this: 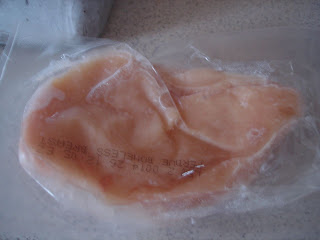 Blech. Ack. Ooajhs. Lmnop. Sick. Looking at these pictures is really hard. At the time, even taking off the plastic was difficult for me. And yes, the chicken was still frozen and hard as a rock. I cut open the plastic, holding the irregular-breast-implant-looking-thing at an arm's length and dumped it on a baking sheet. Oh man, it was all glossy and slippery looking - I cannot believe I actually eat this. 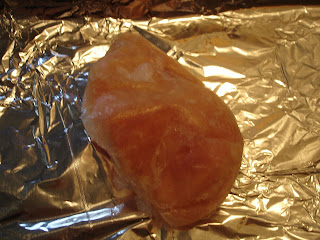 After extensively researching salmonella and what happens when you bake chicken without defrosting, I thought it would be safe to do so. Yes, one might think that somebody as particular as me would have a few more qualms about food safety and preparation, but oh no! If one little unreliable site on the interwebs says it's okay, then it must be! Why bother checking any further? You'll understand more when I write a certain story about a certain burrito, but I can't write about it until next March. You'll see why when you read it, I promise. Oh hey, FORESHADOWING!!! 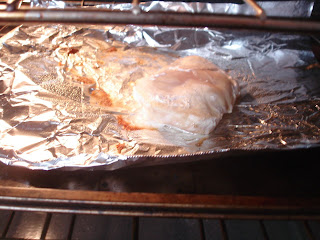 With the chicken in the oven for some amount of time at some temperature, I went about preparing the rest of the food. See, I wanted to make a barbecue chicken pizza. And yes, that is a tortilla instead of pizza crust. Sometimes I cook awful things. But look, this wasn't too bad: barbecue sauce, red onion, tomato, and cilantro. 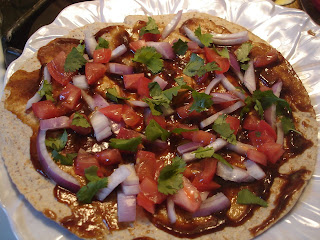 Oh look, the chicken got all cooked! I cut it open in these three places, and then in about 27 more after I took the picture, to make sure it was cooked. And by some miracle, it was! 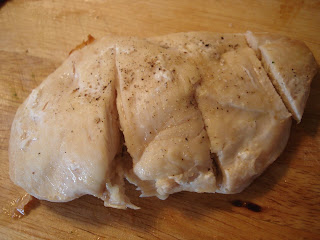 I chopped up the chicken, tossed it on the "pizza" (ahem), and added some cheese. I baked it in the oven for some other amount of time, and it came out like this: 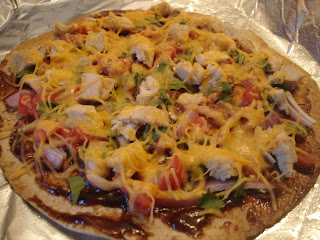 Not too bad! Half-assed, yes. Mediocre, definitely. But fine. Apparently the particularities do not limit me to food that's sort of crappy. Wah wah! 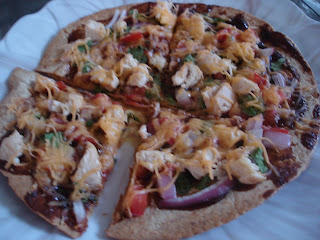 So, are you ready to cook for me, specifically chicken? I'm pretty easily impressed. As long as you don't hold up an entire raw chicken in front of my face, I'll probably be happy with it. I might be okay if you hold up two chicken breasts over your chest and dance around a bit, because man, I do love prop comedy. But honestly, you'd be taking a chance with that one. I'll leave it up to you. Good luck. And get ready to possibly deal with me barfing. I'll try and do it as charmingly as possible.
Posted by Reem Tara at 8:31 PM

Labels: cooking, food, hilarious, sick, thanks for the memories

You know, I don't think I can think of chicken breasts as BREASTS and still eat them. They are some animal's heinously steroided and over-bred-for pectoral muscles. Maybe I could eat a modest breast. A non-enhanced breast.

I have to NOT think of this the next time I eat chicken. Or cook it.

Hey--
I noticed that in this post you linked to a previous entry in your blog. How did you do that? By the way, I'm a VERY picky eater myself!

Holga - if you use blogger, there's a link button at the top of the screen. You highlight the words you want to be the link, click the button, and enter the address of where you want it to link to. Let me know if you need more info.

Anna - you just made me gag a little.