Have you ever been met with a difficult decision regarding food? Like, you're out to breakfast and you want those spinach crepes, but also some corned beef hash, and maybe some flapjacks, and possibly even some cheese-covered hash browns. What's a girl to do? If you're my sister and I, and you have nothing to do all day except go to Target and buy new headbands, then you take your damn time and get all of those items during your leisurely brunch. It's called...

It's also called Being Awesome, but that's another lecture for another time. One Of Each is a beautiful thing. Alls you need is a friend or partner, in addition to yourself, who is good at sharing, an open mind towards food, and a hearty appetite. On a good day, I have one of those three (the hearty appetite, duh). I'm a picky eater, I know. And honestly, I really hate sharing food. This one time, I even said no to my friend's five-year-old son who asked me for a bite of my sandwich. Well, to be fair, I gave him one bite, but when he asked for a second bite, I said no and that he had to go ask his dad for something to eat. While he went, I hurriedly polished off my sandwich. Sorry, kids. I don't share well. The one main exception is when I'm out to lunch with my mom or sister, and we happen to have the same taste for two (or more, apparently) different things, and we go splitsies. Which brings me back to my original point: One Of Each.

Tonight was one of those nights in which I was hungry but had no idea what I wanted. I started boiling eggs, but I didn't know what I was going to do with them. I ended up making egg salad with dill pickles cut up in it. Delicious, but I didn't really want much of it for dinner. So, I chose to make a One Of Each meal. English muffins or bagels are great for this type of meal since there are two sides to them, and each side can consist of totally different things. You could, hypothetically, use crackers and have One Of Each times a zillion, but you might want to tone it down a bit. Nobody likes a crazy. Unless you're a great kind of crazy. Then I like you.

Anyhow. Here were the ingredients involved in tonight's One Of Each dinner; creamed honey, Laughing Cow cheese (original swiss flavor), fig jam, and peanut butter. Concerned about combinations, eh? Don't worry - I had a vision. 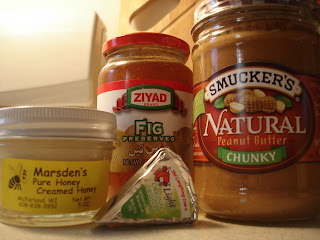 First you have to get yourself a delicious english muffin. This is a honey-wheat kind. It smells so good coming out of the toaster. 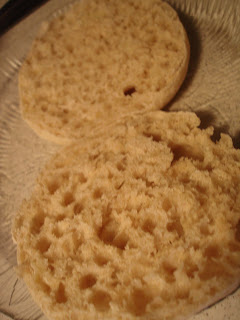 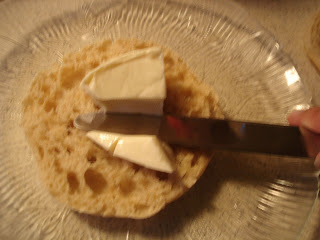 Laughing Cow cheese gets topped with the fig jam, obviously. This was inspired by my mother making an appetizer one Christmas: brie with fig jam. Then, my sister tightened it up on a separate occasion by getting brie with mushrooms in it and topping that with fig jam. Holy delicious. I guess you could say, then, that this is the busted up version of both of those. Busted up, but delicious, mind you. 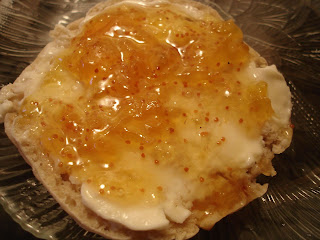 And for the second side of the english muffin, we start with the creamed honey. I'd never had this before, but picked it up from the farmer's market yesterday from the Marsden's Farm booth. It's lovely! 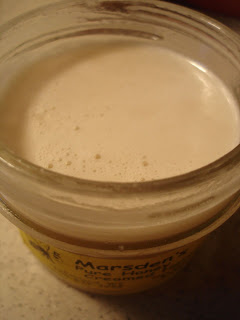 Actually, the peanut butter goes on first (chunky, in this case), and the honey is spread on top. 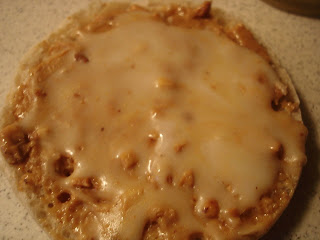 For an extra touch of class and flavor, chop up some banana slices. Chop them diagonally so they look beautiful, like this. 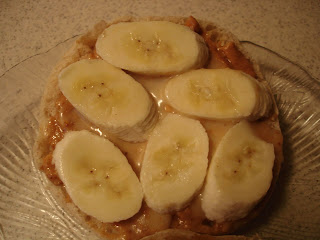 Look! One of each! Living in harmony on this simple plate. If only the world could take a hint from this delicious food and the concept of One Of Each... 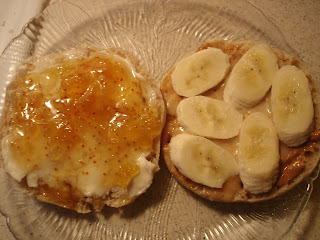 That's a bite I took. Then I had to stop taking pictures because I was too hungry for awesomeness. 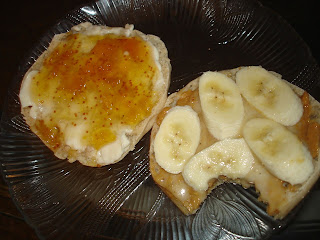 So there you have it! One Of Each! And here's a bonus picture from my beautiful drive back from Columbus, WI this afternoon. It has nothing to do with One Of Each, really, but it is mighty pretty. 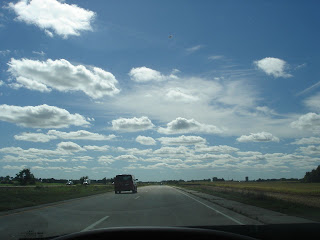 HA HA'z. "That's what she said!" Also this makes me want an english muffin.

Dude! I always do this. . .and get made fun of mercilessly! I think we're overdue for a one of each lunch date!

I also ALWAYS want breakfast and lunch when i go out to eat- like a sandwich with pancakes- I need a good partner for this.

It is a beautiful photo on the way home from Columbus! And I personally know it was such a sunny but blustery day so that makes it even more lovely to think about when viewing the photo. I really like how your stolen college cafeteria or OCB salad plate makes a frequent appearance on this blog. And I now plan to have peanut butter and honey on my toast in the AM. Or before I tuck in tonight. WE'LL SEE! ONE OF EACH??

There were also latkes, Reemie. With apple sauce AND sour cream. :) xoxo

also, this is the most hilarious post of the year. you outdid yourself! Even funnier than passive-aggressive nom de plumes that you might also dabble in.

@Tara, sandwich and pancakes, eh? I also like these One Of Eaches:

I just referred to One of Each in my blog. My dad and I enjoyed One of Each this morning at breakfast. We went halfsies:
Sweet: peanutbutter-banana french toast
Savory: goat cheese omlet with other stuff I can't remember, potatoes